Estonia has lost a point in the Corruption Perception Index

In the 2021 Corruption Perception Index published by Transparency International, Estonia lost a point compared to the previous year, now sharing places 13-17 with 74 points together with Canada, Iceland, Ireland and Austria.

“This time we are in an interesting situation, where we have seemingly risen in the rankings, but have fewer points. Thus, our place has improved because the results of other countries have deteriorated, which is by no means a win for us in terms of our ability to fight corruption,” commented Steven-Hristo Evestus, Chairman of the Board of Transparency International Estonia.

An analysis of the 10-year results of the CPI shows that Estonia is one of the 25 countries that has improved its score to a statistically significant extent. “Since 2012, Estonia’s score has increased by 10 points, which is a big step forward. In the last five years, however, our result has remained practically the same,” Evestus explained the results.

In 2021, however, a number of important developments took place, the effects of which will be reflected in some of the following index results. In March, the government adopted Good Practice in Communicating with Lobbyists, which has led a large number of government agencies to publish lobby meetings with senior officials. In the autumn, the Ministry of Justice sent a draft amendment to the Political Parties Act for public approval, and amendments to the Local Government Organisation Act are expected soon. The Whistleblower Protection Act is expected to enter into force in mid-2022, providing protection for whistleblowers and requiring larger organisations to set up hotlines.

“We hope that the strengthening and creation of such important laws will help us all to better prevent and fight corruption. Without implementation and behavioural change, the law will otherwise just collect dust in the drawer,” Evestus emphasised.

CPI is the combined result of up to 13 independent studies and expert group assessments. The index does not include private sector corruption and money laundering. For full results and regional analyses of CPI 2021, see the Transparency International website: https://www.transparency.org/en/cpi/2021 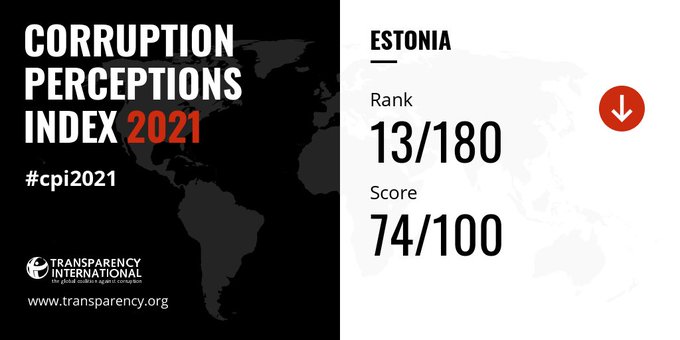